“Romanticism for data fanciers and ham radio fans, watching sunsets and satellite launches staging and making perceptible the activities and patterns of motion of “invisible” forms of technology that seem to be capable of independent action.
The user has the opportunity to follow the race of NOAA 14 and meteor 3-5 two earth observation satellites, one american and one russian, during a live-transmission from the on-board cameras of the two orbiters. Two receiver units are provided, each consisting of a hand-held antenna, coaxial cable, receiver and a laptop with sound card. A simulation calculated from the orbital data offers an overview of the activities taking place and depicts them acoustically.” – from the festival catalog

Thanks to christian h. bock for his decoding software “wxsat” 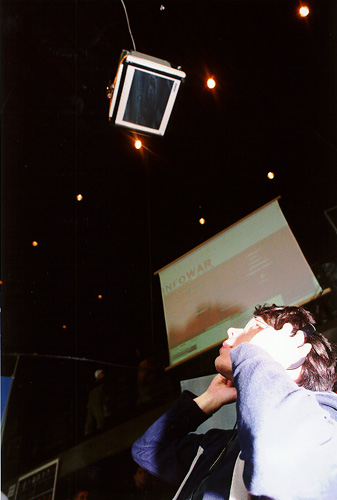